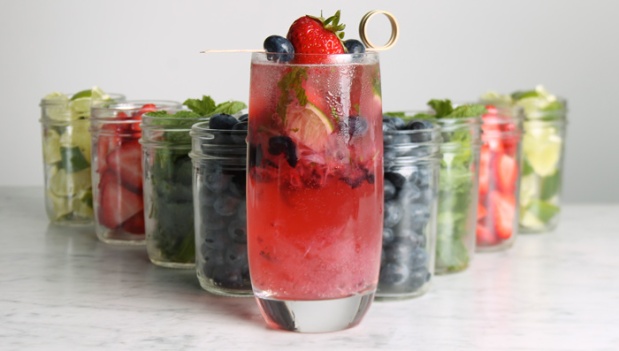 This is a fruity, summery cocktail, not too sweet and just in time for election fever! 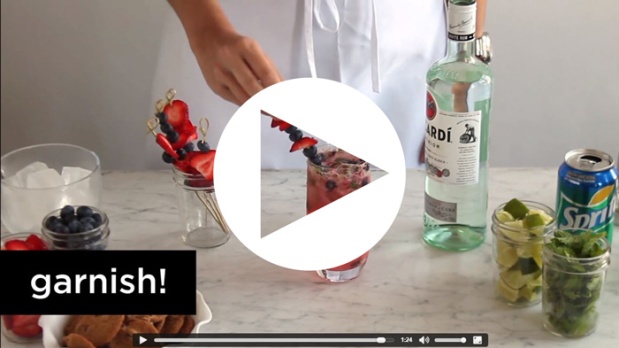 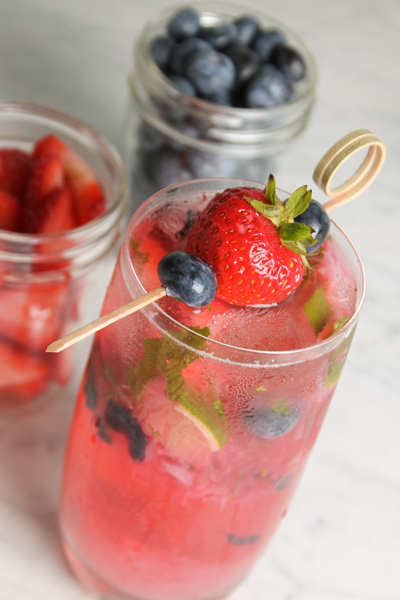 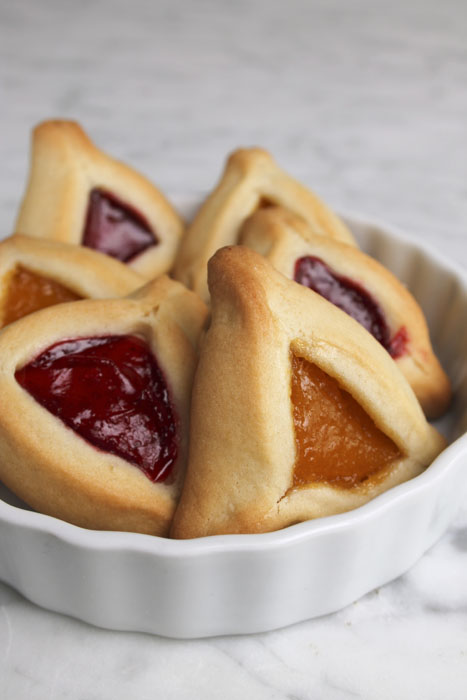 I’ll go-ahead and admit it: before I moved to NYC, the only Jewish holiday I could name was Hanukkah.

As an attempt at some justification of this inexcusable ignorance, .03% of the population of North Carolina (where I spent a decade of my formative years) is Jewish.

Side effect: I lived a Hamantaschen-deprived life.

Hamantachen are cakey sugar dough cookies with a filling, most traditionally poppy seeds or prune butter made & eaten to celebrate Purim. Purim is a holiday similar to Mardi Gras in that it is celebrated with lots of heavy drinking and masquerading. It celebrates the story of Esther, whose bravery saved the Persian Jews 2,500 years ago.

The hamantaschen recipe below is my friend Jill’s, by way of her Jewish boyfriend’s grandmother. Those are her hands in the photos, too! 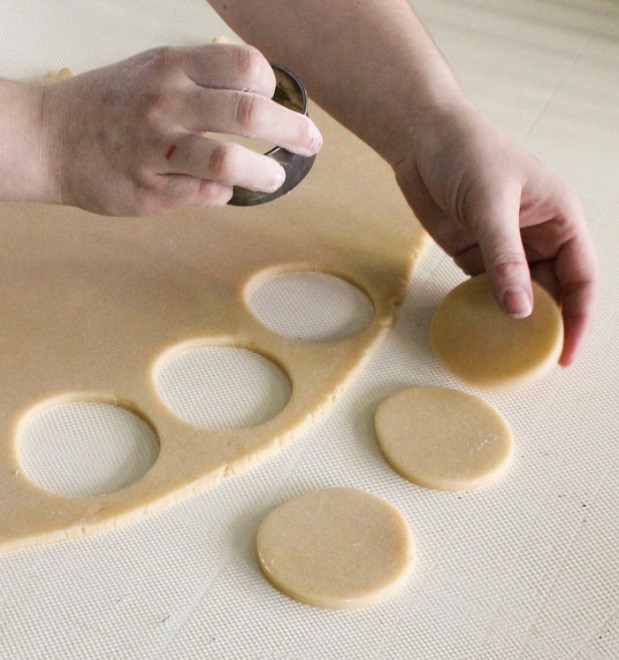 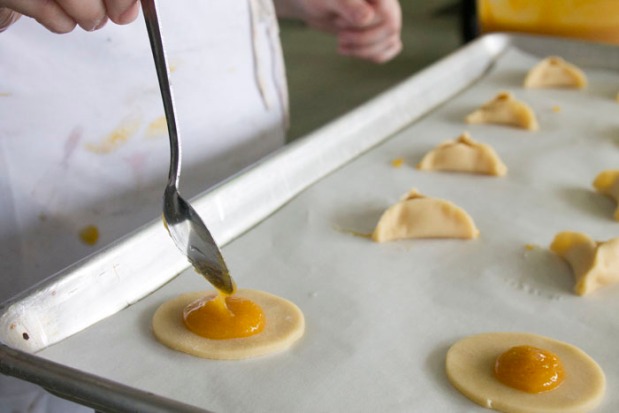 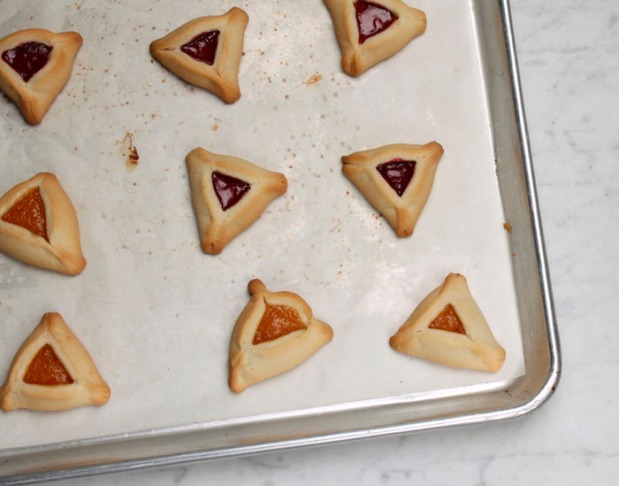 Keeps in the refrigerator for up to 3 weeks and also freezes well.

Thanks to Brenna Ozment, guest baker, photographer,
and author of this post! 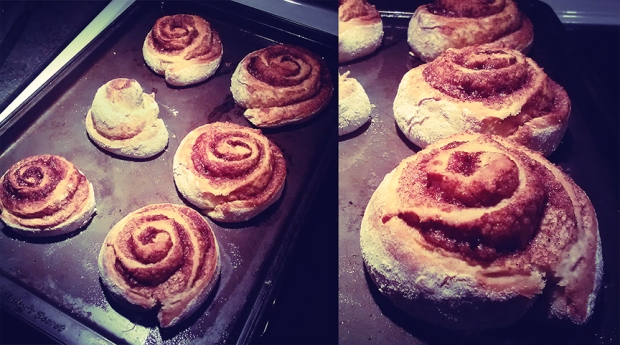 I am not an experienced baker, but I have done holiday baking as assistant to my lovely sister Jessica. Here documents the most elaborate baking endeavor I’ve attempted on my own.

I saw three bananas in the fruit bowl slowly turning black and decided to make something for the family. We all love cinnamon rolls yet they have had a sporadic appearance on the table. I settled on Banana Bread Cinnamon Rolls from the Cooking Classy.

I definitely didn’t learn from that silly project in elementary school, where they give you a whole list of directions like “write your name on the chalkboard” and then at the end it says to not do any of it, and I definitely didn’t read the recipe directions in their entirety before I started baking. This recipe is intense! The dough needs to be left to rise twice, exact temperatures for the milk and butter mixture when you add the yeast. Anyway, I decided to wing it. 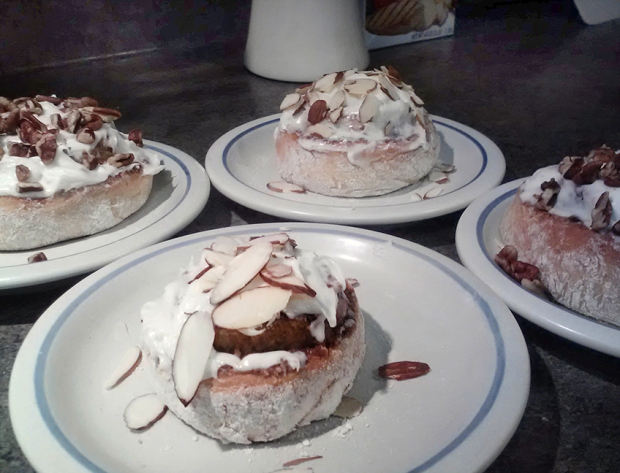 First purée the bananas with lemon juice. I just put them in a standup mixer and squeezed some fresh lemon juice in. I really hope no one finds a stray lemon seed… oops. Meanwhile, I heated the milk and diced butter mixture on the stove. Then I removed the banana bowl and put a new bowl where you add the oil and the milk/butter and let it cool (no thermometer so I just guesstimated) and add the yeast then let it stand for 5 minutes. Thank god for timers on stoves. Next you add the sugar, salt, egg yolk, and 2 cups of BREAD flour and bananas. The directions say to use a paddle attachment; I just used the whisk ones and kept stopping it to fold the dough around. Also, I just used bleached white flour. Then add more flour and corn-starch with a different attachment (I used the same one again) and let it rise for an hour and half.

When I came back I had forgotten where I was in the directions and so I re-read it like 5 times skipping around trying to find my place. Not very time efficient, but that’s the way I roll! In a small bowl I added a bunch of light brown sugar, and dumped in some cinnamon and nutmeg. Measure, you ask, I answer: why?!

Separately, add more flour and baking powder to the now risen dough. I kneaded it with my hands, not the mixer, despite it covering my hands as it is very very very sticky by this point. Next lay it out on a surface that is very floured and roll out with a rolling-pin. Keep a little cup of flour next to you so you can re-flour your hands and the roller constantly. Next, spread melted butter with a spoon, spreading it around with the back of the spoon, on the now flattened dough. Pour the awesome cinnamon roll filling on the dough. The more square you make the dough when you roll it out, the less likely you will have two oblong rolls when you cut. Once it is rolled up (be careful about the dough sticking underneath!! Pull lightly!!) use a large non-serrated knife to cut it into 12 rolls. They will flatten: when you pick them up and put them on a buttered cooking pan, reshape them circular. Then cover AGAIN and let rise for 45 minutes. Bake and then put some awesome stuff on top like cream cheese frosting and nuts.

They are in the oven now… I am very curious if my “winging it” will work. Baking is not always forgiving to this approach.

Now that I have awaken from a very pleasant sugar coma, I must say, those rolls are awesome. They may have been better had I followed the directions precisely, but I can’t imagine by much. Cooking is an experiment! And although I thoroughly enjoyed mine, when I am make challah bread tomorrow, I will follow those directions as close as possible and read ALL the directions diligently before I begin. 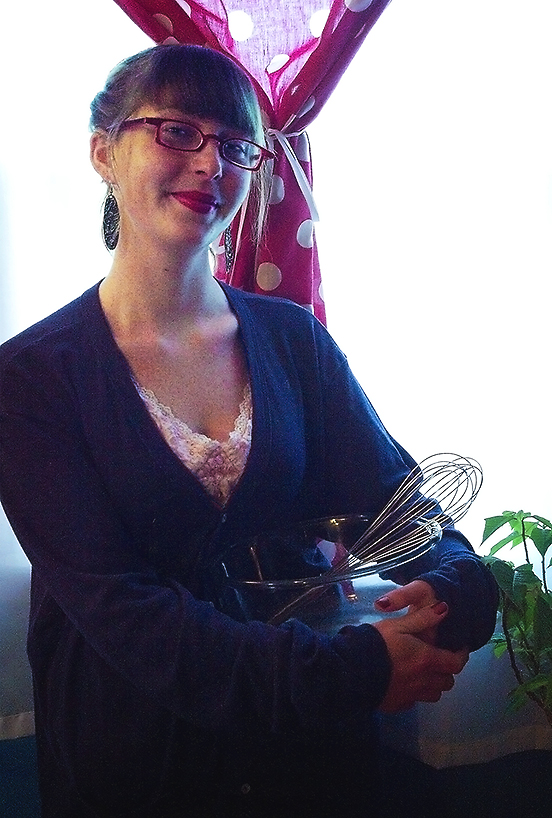 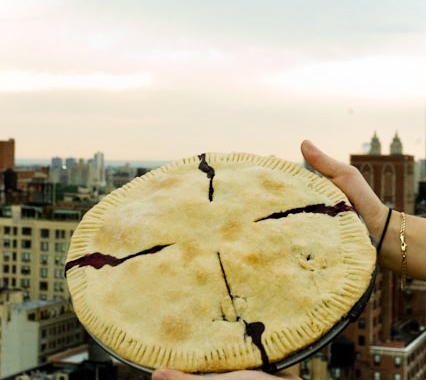 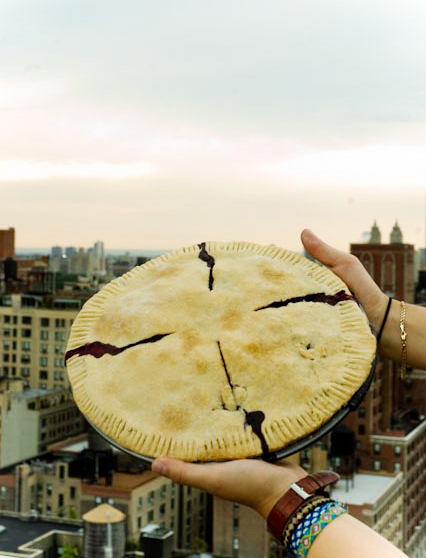 A teacher friend of mine, using her summer vacation to cross things off her bucket list, revealed to me her intention to lose her pastry-making virginity. She consented to have the occasion documented. Here is the result. 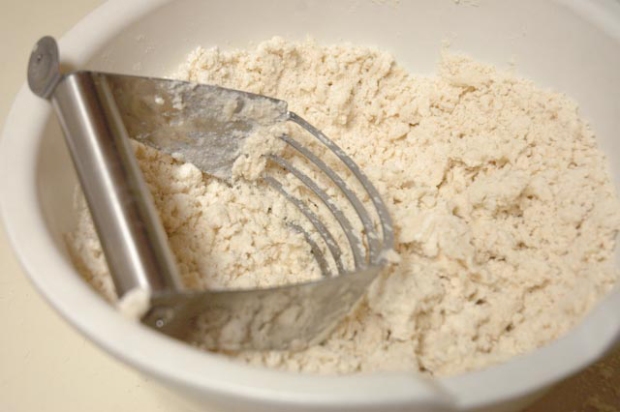 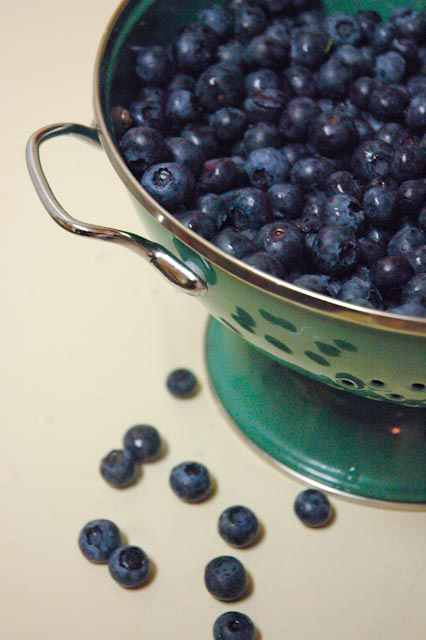 I’ve made a pie crust or two in the past, but with highly inconsistent results. Apparently, the keys to success are SPEED & TEMPERATURE.

As with all flour related cooking experiments, the gluten development (or rather the lack of it in this case) is the important factor in a delicate, flaky pastry. Gluten is the protein structure that forms when gas is released as bread rises; a high protein flour will allow the stretchy, chewy, workable dough ideal for say, pizza crust. So alternatively, using a low protein flour and discouraging gluten formation will result in a more delicate pastry.

Keep the dough ingredients chilled and work the dough as little as possible. Chill both the fat and the water. As for the type of fat used, butter is great for flavor, and shortening for texture- a combination works especially well. 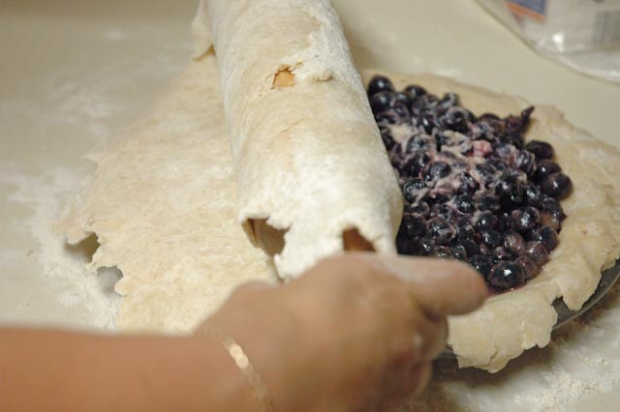 Recipe adapted from Betty Crocker and Joy of Cooking

In medium bowl, mix 2 cups flour and the salt. Cut in the shortening and butter using a pastry blender. Sprinkle with cold water, 1 tablespoon at a time, tossing with fork until all flour is moistened and pastry almost cleans side of bowl, adding 1-2 teaspoons more water if necessary. It should still look dry. Pinch some of the dough to see if it clumps together: if it does, it’s ready.

Gather pastry into a ball. Divide in half; shape into 2 discs and wrap in plastic wrap. Refrigerate for about 45 minutes.

Heat oven to 425°F. With floured rolling-pin, roll one disc into a sheet 2 inches larger than upside-down 9-inch glass pie plate. Roll sheet of dough around rolling-pin & transfer to the pie plate. If it tears or cracks, just pinch it together again and use scraps & water to repair any holes.

In a large bowl, mix the sugar, 1/2 cup flour and the cinnamon with the blueberries and spoon into pastry-lined pie plate. Sprinkle with lemon juice and the butter cut into small pieces. Cover with top pastry. Cut slits in it and crimp the edges either with a fork or by pinching around the edge with your fingers. Cover edge with a strip of foil to prevent the rim from getting too brown.

Bake 35-45 minutes or until crust is golden brown and juice begins to bubble through the slits in the crust, removing foil for last 15 minutes of baking. Cool 2+ hours for the increased possibility of intact slices. 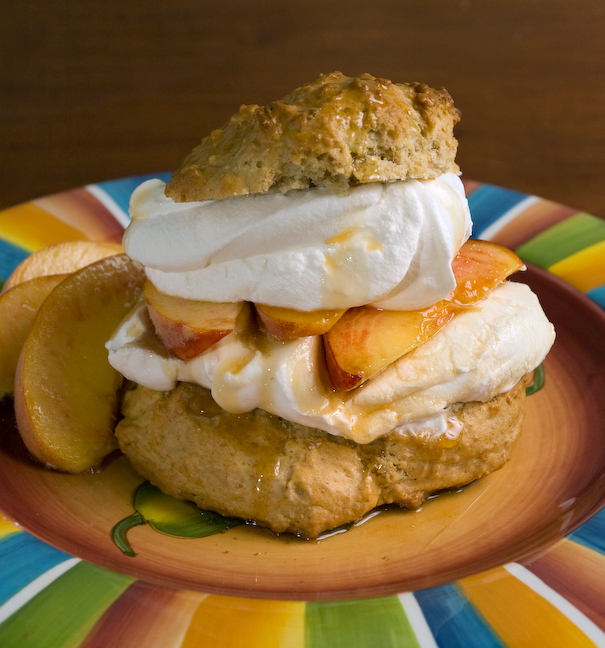 The autumnal equinox officiated the end of summer last week (September 23), and with it comes the end of peach season. To honor both summer and one of its more divine gifts, what could be more appropriate than shortcake?

Biscuits, prepared with Trader Joe’s Multigrain Baking & Pancake Mix, according to recipe on the box:

Cool Whip topping or, if you’re feeling ambitious, make your own: 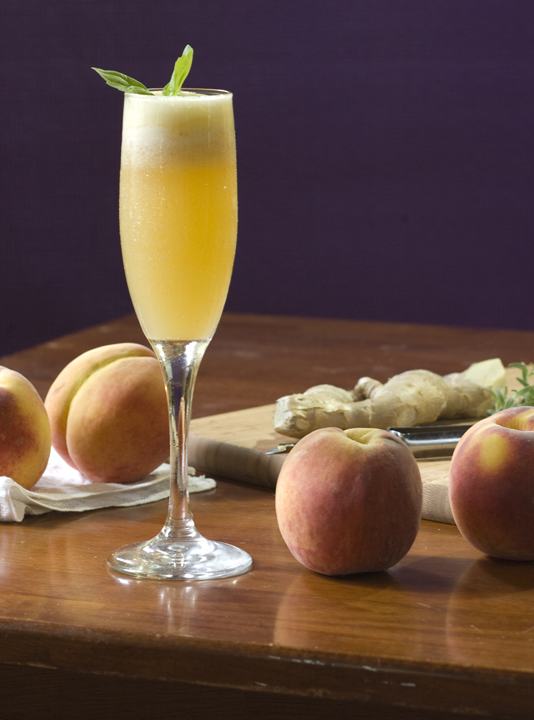 My cousin and I broke out some entertaining show stoppers in honor of some lovely ladies visiting this past weekend. One of these amazing women was passing through on her way back home from Africa after spending a month volunteering with Mothers Without Borders. This organization provides safe shelter, food, and education to orphans, whose abandonment is predominantly due to the death of HIV-infected parents. Ultimate luxury (in this case, fresh peaches!) is most enjoyed in such loving company.

In a blender, puree the pitted peach, the juice of the lemon, a bit of finely chopped ginger and enough soda or water to make a syrup. Chill and just before serving, pour into cocktail glasses garnished with a piece of  candied ginger. Alternately, muddle peach slices and lemon juice in a tall glass (with whiskey if you are feeling boozy!). Fill the glass to the top with ice then with ginger ale.
Other fabulous combos I HIGHLY recommend are: 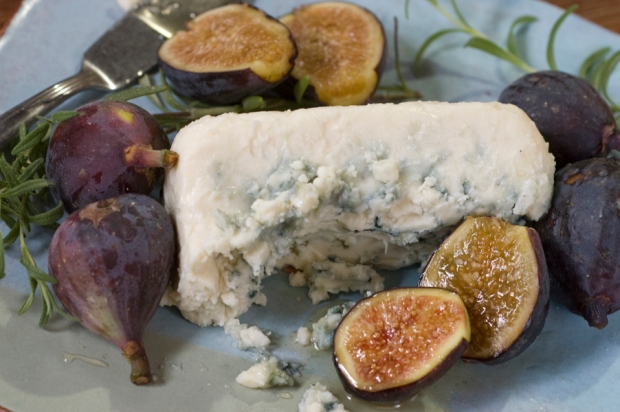 Serve the cheese and figs drizzled with honey. 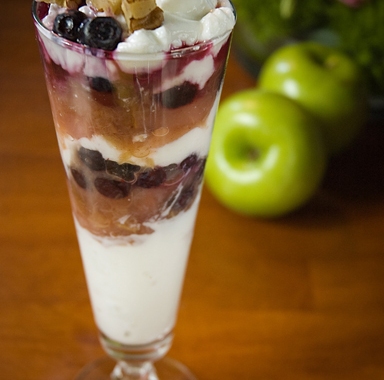 As the only meal where the entrée very well may have a higher sugar content than even the most indulgent desserts, breakfast is easily my favorite meal.  This deceptively healthy treat passes as breakfast, dessert or an afternoon snack and is one of best efforts to thwart my monstrous sweet tooth. An added bonus, rhubarb is in season for a bit longer and can still be seen at very reasonable prices. Though I doubt I’ve ever seen more than the stalk of the plant available at the grocery store, be aware that the leaves are toxic. 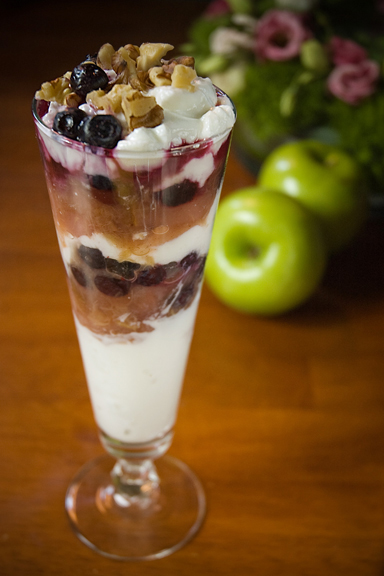