Last week I had the opportunity to visit my aunt and uncle’s famous garden in Virgil, NY (about a half hour east of Ithaca); ‘famous’ because it was recently featured in an article in their local paper, the Courtland Standard. Click here to see the article as it appeared in print.

By KATIE HALL, Living and Leisure Editor of the Courtland Standard

Chris Applegate said people don’t have to have a massive garden.

“Anyone can put in a couple of raised beds and raise a ton of stuff. You don’t have to have a huge garden. Make a raised bed. You would be amazed at what you can grow,” said the Virgil woman, a gardener for 38 years.

Applegate is a vendor and founder in the Virgil Farmer’s Market and spends 8 to 10 hours a day with her plants. She and her husband, Bob, a retired Cortland School District teacher, live off a country road on a hill bordering Greek Peak. Their garden consists of 32 waist-high raised beds, as well as a traditional row garden that is about 100 by 40 feet in size.

Applegate, who owned two restaurants in her day, Mother Courage and Applegate’s, both in Cortland, has a special room in her home just for canning her produce. She also freezes her food. She makes bread and granola from scratch to sell at the market. The couple has an unheated greenhouse, allowing them to have plants 10 months out of the year. They have a root cellar to store their vegetables, like potatoes, year round.

“I have always gardened. Originally in my 20s, I was a single mom. I couldn’t afford fresh vegetables. I started canning and freezing,” she said.

It was also a time when the organic gardening movement was starting to take off. “Even when I had Applegate’s and was into 75 hours a week, I always had a garden,” she said.

She found it a way to de-stress after work, she said.

After working her restaurants, which Applegate found to be round the clock work, she worked at ASC at SUNY Cortland, running a dining hall for many years. Her most recent job was teaching food safety at Cornell Cooperative Extension. Now she’s retired, selling produce 9 a.m. to noon Saturdays at the four corners in Virgil. The market has about four vendors selling their goods.

“I have been watering four hours a day to keep the garden alive,” said Applegate.

Her husband is in charge of the compost and every trip to Cortland includes a stop at the Franklin Street DPW to pick up mulch. He’s also in charge of pruning and caring for the couple’s fruit trees. They have a pond and use gravity to water the plants.

A unique feature of their garden is their raised beds, which resemble tubs that are about five feet in diameter. They use 16 feet of wire fencing, bend it into a circle, bolt it, and line it with “various things.”

“This is from a defunct tilapia farm in Groton,” she said, pointing to a white plastic rim that lined a bed, enclosed in wire fencing. “These were feed tanks suspended over huge tanks,” she said.

Some of the beds have frames over them made from PVC pipe. In the early spring, if they think there’s going to be a frost, the Applegates put agriculture fabric on top of the frame. At the top of the frame is a little circle, where Applegate can secure a hose to water the plants.

She pointed to one lining of a metal Cortland Standard page plate in one bed, in fact.

“You fill it half way with sod and compost and then have to buy topsoil. The soil here is awful: clay and rock,” she said.

The tubs are easy to plant, weed and harvest from (less bending) and keep the soil warm in the spring.

“The idea is just keep planting. Plant all through the season … Then you can keep harvesting until November.”

She plants seven varieties of potatoes.

Her husband cares for the fruit trees, apple, apricots, currents, pears, wild apples. He is working on a compost pile for next year’s garden: leaf mulch from Franklin Street, mixed with horse manure from horse owners, grass clippings and hay that the chickens have used for bedding. “He layers and piles and leaves it alone,” said Applegate. “We do slow composting.”

“That will be what we put on the garden in the fall, when we are done with them. It will sit on it in the winter and improve the soil.”

Another pile situated next to the row garden is last year’s pile and is in use for this year’s garden. No pesticides are used, only compost and about five pounds of organic fertilizer used sparingly the whole year.

The secret for success is not so much feeding the plants but feeding the soil, Applegate said, which is full of earthworms, bacteria and microorganisms that should be doing the work of fertilizing. 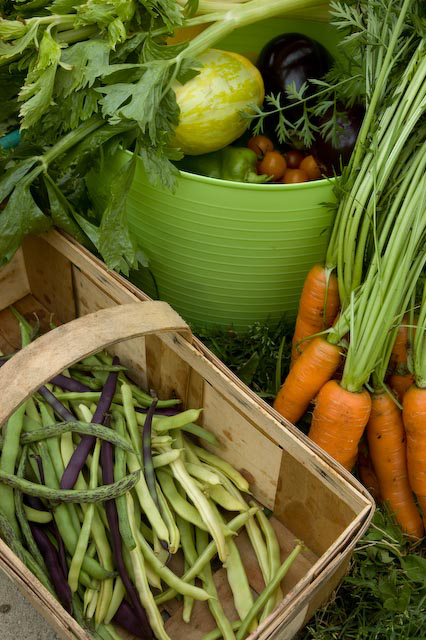